I've just been at the swimming pool. There isn't always music on, but this week there is - and it's all Christmas songs. My breast-stroke was hampered by a big grin when, after "Last Christmas", "Santa Claus Is Coming To Town" and "All I Want For Christmas Is You", the hall echoed with water-distorted orchestras on the most extravagant 1940s renditions of "White Christmas" and "The Christmas Song". 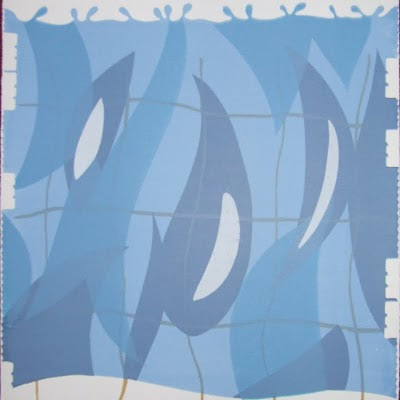 It's the screenprint that I was working on a couple of weeks ago. Something went very wrong, but it looks decent and may be worth revisiting.

That reminds me (by obvious debt, as you'll see below): the Bridget Riley roadshow has rolled into the National Gallery for the next few months. It's a different exhibition from that which has toured for the past year or two. Riley's team has painted some new and recent works onto the walls. Since my visit, I've been comparing them to the influences presented in the exhibition. Paintings by Seurat, Raphael, Mantegna and Van Eyck (an early copy by Riley) indicate the roots of Riley's approach to the interplay of elements; colour choices and the optical tricks of image-making. Best of all (although it perhaps shouldn't be), David Thompson's captivating film is there again. 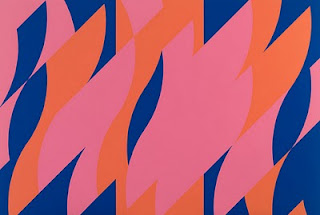