A quick update, because...  look what I found in the Empire Youth Annual 1948 (which I found on a wall nearby)!  It's rather similar to the linocut border that I've been making, showing a rough chronology of London's taller buildings.

Posted by Christopher Todd at 8:38 pm No comments:

One Tall Building In London

Since you asked...  how many of these can you identify?


Posted by Christopher Todd at 5:38 pm No comments:

Fresh from my workings for an upcoming project...  how many of these can you identify?

Here are a few drawings from the trip to East Anglia.  The plans (mentioned last week) changed somewhat:  the Beccles / Saxmundham / Aldeburgh day became Cambridge; the Winterton / Cromer day became Bury St. Edmunds.  Both were my first visit, and there was more to see in Great Yarmouth.

A group of us visited Eltham Palace, outside London, for its odd mixture of Tudor and Art Deco.  I hadn't noticed Gilbert Ledward's 1930s stone carvings set above the porch, representing mountain climbing, sports, gardening and seafaring.

In Cambridge the exams were ending.  We saw students soaking each other with champagne and later heading out to dinners in matching jackets.  I was sitting on a shaded bank, drawing King's College Chapel and the tops of punting poles, when I heard a soft American voice saying "Don't move an inch...":  she wanted to photograph the artist for her daughter's "Anglophile scrapbook".


Great Yarmouth's characteristic layout, scores of long, narrow, parallel alleyways ("rows") leading away from the quay, is still partially intact.  In the aftermath of heavy wartime bombing, many features dating back to the 17th Century were found hidden behind later walls.  A lot of the material was gathered together in a few semi-restored Row Houses.  It's a surprisingly large collection with a lot to enjoy, from elaborate plaster ceilings to hard-hat cellars.  The attendant dashed through after us to hang out the authentic washing on the line in the yard.

Sadly, the Olympia Cafeteria is no more.  It was a palace of pink and yellow plastic on Marine Parade with every kind of lowbrow seaside food.  Its navy-and-brown replacement might be just the same but I just don't want to find out.  We went to Las Palmas Cafeteria instead.
Posted by Christopher Todd at 9:26 am No comments:

That's where I'm heading for a few days.

It's a complicated, finely-planned trip, with some time in London on the way.  There will be many trains and I'll see some place I've never visited - ie. any of Suffolk - mostly on flying visits:  Lowestoft, Saxmundham, Beccles and Aldeburgh, where the festival is in full swing.

Let's hope I get some good drawing done.

Posted by Christopher Todd at 10:43 am No comments:

I spent the weekend in High Wycombe for a wedding.  The reception was a few miles out at Ibstone.  On Saturday morning Adam and I explored the bluebell-filled woods, but it wasn't until the next day that I went further into the village and saw the standing stone that gives the settlement its name.  I've read now that it was Hibba's historic boundary stone between Buckinghamshire and Oxfordshire.

Between breakfast and checking out, I hadn't time to go as far as the church, but here's a sketchbook page from my brief exploration.  Here you will find: 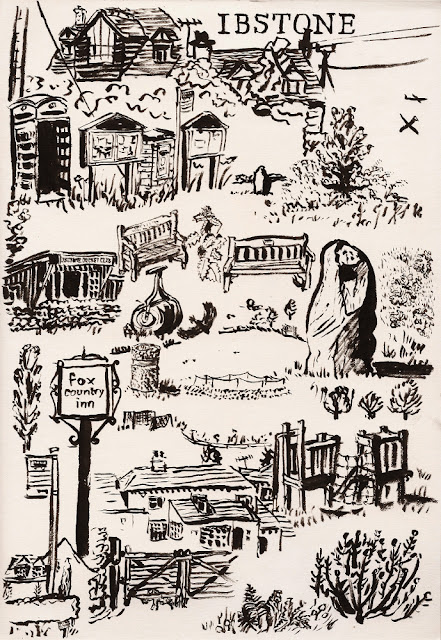 Andy and Jess's wedding was heaps of fun:  singable hymns, classic cars, a hog roast, extensive cheese board, chocolate fountains and raucous dancing.  The couple are on the road now and we all wish them every kind of happiness. 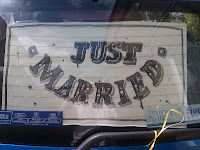 Posted by Christopher Todd at 10:23 am No comments: