The Museum Of Everything 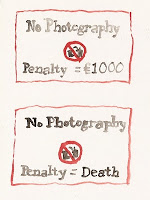 This is another temporary exhibition built out of Peter Blake's amassed ephemera of British culture over the past couple of hundred years. A lot of it is concerned with circuses, fairs and freakshows; and outsider art from shell artists to taxidermy (Walter Potter), tapestry (Ted Willcox) and Cheeta The Chimpanzee, the first non-human to exhibit in the National Gallery.

There were a lot of signs against photography. I made notes and drew, but the prohibition is a good reminder to take everything in in the time spent there, and to treat the whole thing as it was intended: not as a taxonomy of old-fashioned crafts, but a huge three-dimensional collage.