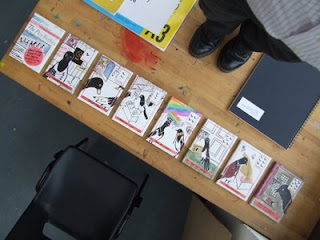 "I'm not keen on cauliflower"; "I dislike the trilby". This morning I was thinking about English and our habit of implying aversion with a negative of approbation. We've developed polite ways to equivocate and distance ourselves from any strong statement. It's hard to phrase a negative view without using a word based on the opposite.

Only a couple of hours later I found considerable ease in saying "I hate Wednesdays".

After a few weeks of the term I was beginning to feel frustrated at the fuss of 100 minutes' travel to and from Portsmouth for a 75-minute lecture, but the past three have been disastrous.

5/11: I overslept because of the US elections and woke too late and bleary to fling myself down there before the lecture ended.

12/11: I arrived in time, only to find that the lecture had been moved to an earlier time, so I came in near the end and didn't understand much. I left my luggage on the train home (and retrieved it after many enquiries). The whole morning was a waste of eight pounds and four hours.

19/11: The train was late to Southampton and even later to Portsmouth. I was late for the lecture and found that I really didn't care about it anyway. I hadn't slept much and I wanted only to hand my essay in and go home to write the next one. I left after half an hour.

So I (here's a definite word) hate Wednesdays and I'm (here's another one) inclined to give up going in at all.
Posted by Christopher Todd at 12:56 pm 1 comment: