For the first time in a few years - and as a pleasant by-product of my studies - I have a Winter holiday.

Last week I spent a few days in ambitious artistic luxury at the V&A, drawing sculptures and photographing textiles for future inspiration. 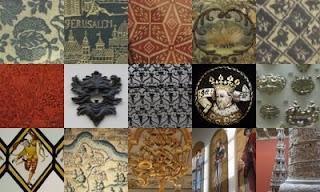 The rest of the time I visited a variety of cafes and started my equally-ambitious reading pile from various libraries. 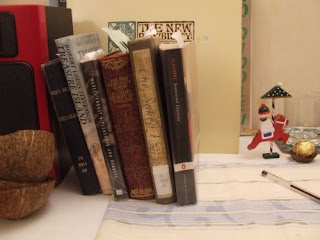 Now, at home with my family, my creativity has gone into Christmas preparations. I've just finished wrapping presents. 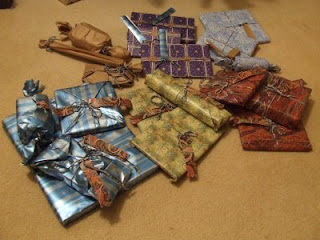 Posted by Christopher Todd at 12:34 am No comments:

Last night I carved a turkey; this afternoon I stuffed a pelican; this evening I've brought home the ostrich.
Posted by Christopher Todd at 6:47 pm No comments:

But...
I love fonts! They fill me with happiness. I used to spend many hours quite regularly basking like a shark - throat open wide for free fonts. There are hundreds for every situation and mood and hundreds more that will never be useful but are always so delicious and enticing. A long trawl would always lead to a new collection and time wasted with pleasure.

In recent years I discovered the rules above and entered a subtle process of repression. I became a closet font fan, shying away from sharing my love of computer typefaces for fear that people will disapprove or simply won't understand.

Last week the box was opened when, making a poster for a Christmas dinner, I found the exact point at which an orgasm of different typefaces is acceptable. I was set free and printed out a tidy notice

and it was called
Stunning;
Awesome;
The Prince of Posters!

What was I worrying about?
Posted by Christopher Todd at 6:23 pm No comments:

Friday, 7.45 am: arrive at college laden with:
The tutors have given everyone a brief review of their work thus far. That's why I had to bring my portfolio. This was encouraging overall and highlighted my need to spend time in the holidays making a proper album of inspiration and ideas.

My "Self-Identity" project had been marked: I have a respectable 76%. The tutor commented that I would benefit from more experimentation in the course of a project.

The lecturer gave my essay on Marcel Duchamp 70%. It's a fair mark and I'm pleased. He felt that it was "solid if rather 'safe'".

So I got on with the current project: writing notes; sketching; arranging my salvaged items; hammering scrap metal in the workshop and borrowing yet more books from the library.

At the end of the day I was too tired to go out as planned. Jon Ahearn, chatting online, mentioned a series called "Samantha Who?". Looking it up I found that it was created by Todd and Ahern.
Posted by Christopher Todd at 1:12 am No comments:

As someone who spends a lot more time listening than watching, today I feel like I'm in visual overload.

Today's lecture was based on David Cronenberg's "Videodrome" (and included videos of Debby Harry and Blondie). Last week we studied his "Crash". Next week we've Peter Greenaway's "The Cook, The Thief, His Wife And Her Lover" and we've already had his "The Draughtsman's Contract". (I missed the "Blade Runner" lecture)

This came in on top of a glut of mind-stealing science fiction time-wastage last night. Having seen only a portion of "Survivors" on the television I spent far too long looking up that programme, its predecessor and other similar series, as directed by Wikipedia, such as "Threads", "The Changes", "The Last Train", "The Tribe", "Jericho" and more. Post-apocalyptic fiction is always bewitching so it has plagued me all day.

The radio rescued me this afternoon with an engaging afternoon play by Sebastian Baczkiewicz, in a series about Pilgrim, a folkloric figure doomed to walk the earth for eternity.
Posted by Christopher Todd at 6:30 pm No comments:

I've enjoyed a couple of extra-curricular early-evening lectures at the universities, in little lecture theatres with a lot of clever and important people drinking wine.

A few weeks ago the CMRC organisation at Southampton hosted Prof. Nigel Saul on "Chivalry & Commemoration In Late-Medieval England".
Today CEISR at Portsmouth hosted Prof. Sir Christopher Frayling on "Once Upon A Time In Italy: How Europe Re-invented The American West".
I took copious notes because my would-be companion couldn't come.

The travel time allowed me to get going on the research for my current art project, which is the construction of an animal out of recycled or salvaged material. At the moment I'm looking at heraldic and mythical beasts.

Here are the driftwood horses and other trash art.

I'm glad to have got that started but I need to watch The Good, The Bad And The Ugly.
Posted by Christopher Todd at 1:09 am No comments: