A Morris Border (not Border Morris) 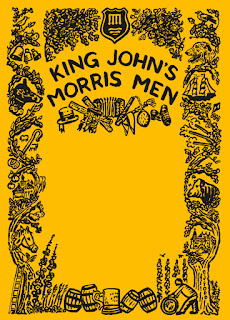 Here's a hearty little project from earlier in the summer, for my morris men in Southampton.

King John's Morris Men wanted a new poster for dancing dates. I thought it would suit a dense border with plenty of details to pick out, taken from dances and songs, along with assorted rural, maritime and alcoholic titbits and ephemera.

Here, because you want to know and because I want to tell you, is a full contents list:

Now, there are several dances that we do but that I couldn't work out how to draw, at least at such a small scale:
Bonnets So Blue, Balance The Straw, Getting Upstairs, Bean Setting, Broad Cupid, Saturday Night, The Vandals Of Hammerwich, Cuckoo's Nest (I should have got that one in), Old Black Joe, Beaux Of London City, Sheriff's Ride, Nuts In May... and whatever Trunkles are.

They all deserve drawing, as do these, although we don't dance them at the moment:
Lads A Bunchum, The Captain And His Whiskers and The Old Woman Tossed Up In A Blanket / The Old Woman Who Carried A Broom.

Look for King John's in the Southampton area and sometimes roving farther.  There are monthly singing evenings and around Christmas there will be mumming and border dancing.  First, on 15th September, KJM is hosting FOLK DANCE SOUTHAMPTON, featuring numerous visiting dance groups in the centre of Southampton and a ceilidh in the evening.
Posted by Christopher Todd at 10:37 pm No comments: