Did I mention the set of Hampshire towns that I've been drawing?  Here's a case study of a tricky one:  Alton.

I settled on the format of a 10cm square containing a pen drawing in black and grey.  The idea is to sum up the town or give its highlights, not to present it as a view.  The arrangements are all different - symmetrical, jumbled, in blocks, splayed out...  It depends on what elements I have to work with.

Now for the process:

First I need to make a list of things to include:  buildings, statues, activities, symbols, natural features...
I start by scouring a bunch of old guidebooks to England or the south:  I would say "old and new" but they're mostly old or older:

Pevsner's Buildings Of England, the AA Leisure Guide, England's Thousand Best Houses, the Blue Guide to England, the Shell Guide To Britain, the Collins Pocket Guide To English Parish Churches, Here's England (by Ruth McKenney - a real treasure); online lists of follies and hills and fairs and so on.
Then come the books about Hampshire, heritage handbooks, leaflets, photo books and gazetteers.

I am in love with local history websites and photo archives.  Of course, the amount online varies but the information available can be staggering.  I don't know all of these towns and I would hate to misrepresent them.

I'll look at aerial views, OS maps and Google Streetview.  If possible, I'll go for a visit.  The project has kept me supplied with reasons to drive to unfamiliar corners of the county and take photos of wooden signs, cricket games, landmark trees, architectural styles and so on.

Having sketched the buildings and picked their best angles, it takes AN AGE to make a satisfactory arrangement - longer each time because I want variety.

Once that's done, the dark, grey and light areas have to be balanced.  It's easy to make it all outlines and not give enough depth.

This is by far the quickest part.  I'll sketch loosely in pencil and then begin the ink.  Finally, the pain of making sure I wait long enough before rubbing out, in fear of the much greater pain of smudging.

Here's the result for Alton, with the following elements:


Wondering what I left out?  Here goes:  the new library, the Methodist chapel (converted), the Palace Cinema, the King's Head, the 20th Century magistrates' court, the Museum Annexe and Allen Gallery, the Alton Machine (a type of coach), the river Wey and the legendary Fanny Adams.

Posted by Christopher Todd at 2:16 pm No comments:

We're well into Autumn.  This week, something that made me feel that I was making the most of the season was a few minutes spent gathering conkers.

It's an inspiring time - you could be making a colour chart of leaves, drying and lacquering fruit for wreaths, making spiced crabapple jellies or positioning decorative squashes... but I got down to a city centre park and scouted from one horse chestnut tree to the next (it made me appreciate the variety of trees in Southampton's Watts Park), filling pockets of a satchel with the shiniest and the roundest nuts.

STAGE TWO:  to play conkers!  To be honest, I didn't play conkers as a boy.  I've collected them more often as decorations.  Research could be endless but, deciding to take this at a run, I perused a few different sets of rules - there are clubs and championships, of course (and a few much-publicised safety concerns) and I'm itching for a match.

The biggest part of preparation is how to treat the conker.  Traditionally, schoolboys have done all sorts of things - boiling in vinegar, filling them with grit and scrap metal, varnishing, baking, storing for years...  Here are my entirely unscientific test batches:


Oh, and I'm saving some for next year.  The old ones are a bit fragile but I'm not too bothered about making the hardest of the hard - I just want some entertaining smashing-up.  I'll know more next year.

As for the strings, I didn't go for the traditional bootlaces but I drilled holes and threaded string.  When play begins, they might turn out to need more knots.


These drawings could form a pleasing pattern but now I'm heading out to see friends and smash nuts on strings - essential for Autumn!
Posted by Christopher Todd at 3:39 pm No comments:

Who doesn't like an evening out in Theatreland? Surrounded by plush velvet, tassels and gilt or in a forest of acoustically engineered shapes; flapping a glossy programme in the heat; suppressing a cough; fretting that the phone isn't turned off...

Here are the smartest and most prestigious of London's concert halls.  It's only this year that I've managed to visit them all*.  As for the theatres - well, there are scores of them and I got it down to a select ten, including the old and the new, dance and opera, west end, south bank and further afield.

These vignettes are fun to assemble and populate.  I dug deep into the oeuvre of obscure musical instruments for London Concert Halls.  For no reason other than my own initial, they all begin with C:
cittern, chitarrone, charango, clarinet, cor Anglais and crumhorn.  On Some London Theatres it's all scenery and the accessories of theatre-going.  The bust on the plinth is Garrick.


* The Cadogan Hall for the Pasadena Roof Orchestra.  I became tearful when they played "A Nightingale Sang In Berkeley Square".

Posted by Christopher Todd at 2:48 pm No comments:

A Monument To Architectural Folly

My love of a rusticated pilaster is documented.  I can dig a dog-tooth and ogle an ogee.  There is a wealth of obscure words for different shaped bits of stone and each one makes me feel that I should store it mentally in case it comes up in a crossword.

For my final day, for a while, of supervising the art school print room, I made a jolly three-colour screenprint that came out of some happy hours looking through books of architectural details and terminology.  It all came together this afternoon and this evening and all twenty copies came out pretty well.


The books in question include works by Matthew Rice and Osbert Lancaster, Peter Ashley's "Preposterous Erections" and a King Penguin on the English Tradition In Design.

Here you will find:

Of course, an antefixa would have been a step too far.
Posted by Christopher Todd at 10:26 pm No comments:

In honour of my national day, here are seven birds in formation.  The formation happens to be that of the Heptarchy - the Anglo-Saxon kingdoms of England.  With the exception of the bittern in East Anglia, I don't think the birds shown are strongly connected with the region where I put them. 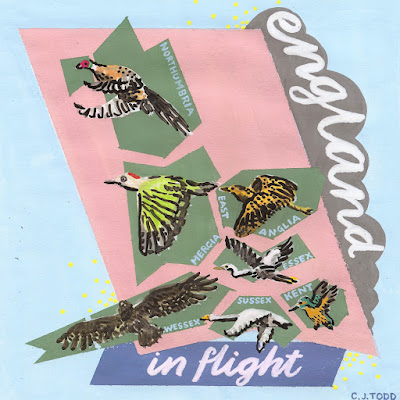 This is something that I've meant to do for a while:  get to grips with gouache; fill a page with colour; be a bit more graphic.  The draft came out a bit more 1980s and less mid-century.

This morning I was talking with friends about sonnets.  I'm not sure that I even studied them at school, let alone learned any, and I never remember the rules.  I looked it up and had a bash, to explain the form by using it.  I'm quite pleased with how my silly sonnet about sonnets came out.


Suppose you wish to set your thoughts in words
But find yourself in need of more than prose.
Love and the dance of poetry go like curds
And whey, deep down each lover surely knows.

But how to find expression that will speak
Your thoughts aloud but also show your skill?
Perhaps you find a soppy rhyme too weak
And haiku's strictures just too quick to fill.

You may in free verse jazzy patterns wind;
Post-modern collage from the phonebook paste;
Stream consciousness unburdening your mind;
But all this may be too loose for your taste.

In sonnets' tidy dance it suits to gird;
Just long and short enough your love to word.

Write me a sonnet!  Correct me about regional birds!  Happy St. George's Day!
Posted by Christopher Todd at 1:59 pm No comments:

I spend a lot of time thinking Hampshire thoughts, compiling snippets of geography and history.  There's a lot of Hampshire that I've never seen.  I'm working on vignettes of a spread of towns and villages.  Here's an example of how things are going.

First, three from the south east:  Bishop's Waltham, with the ruins of the bishop's palace; Wickham, with the Chesapeake Mill supposedly built with timber from the defeated American ship the Chesapeake; and Hambledon, up in the downs, with its cricketing history. 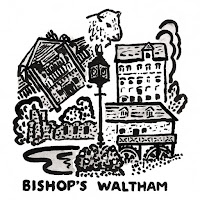 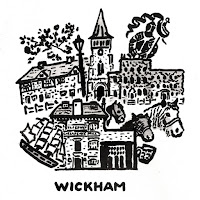 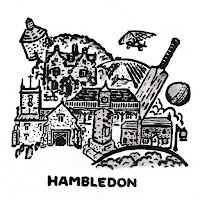 The second set is the three hursts of the New Forest.  There are more settlements of note but these three fit together well.  Lyndhurst is the forest's capital.  Ashurst, the eastern gateway to the forest, is quite small, being combined with Colbury for administrative purposes.  Brockenhurst has the grandest hotels. 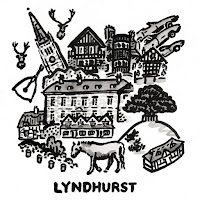 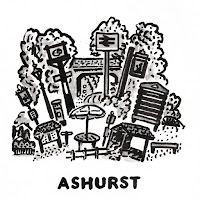 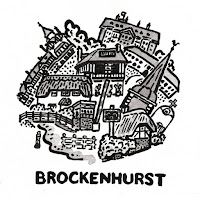 It's a big county.  Wish me luck with the rest of it!
Posted by Christopher Todd at 12:39 am No comments: