Well, I finished my final minor project.  I'll show you the finished piece another time, and tell you about what went well and what I'll need to learn from, but here I'll talk about the process.

I've always been fond of the skewed perspective and stylised foliage and patterns of mediaeval art, from the Bayeux Tapestry, bestiaries and illuminations to recent imitations.  Terry Gilliam built his animations for Monty Python & The Holy Grail on it.  Pauline Baynes' illustrations for C.S.Lewis and Tolkien showed that she had internalised the art of European and Persian mediaeval manuscripts.  Her award-winning illustrations for Grant Uden's 1968 "Dictionary of Chivalry" was a major source for me, although I don't share her beautifully clean line.  I'm sure a lot of it comes down to having spent many hours in my teens doing this jigsaw of the fleur-de-lys legend from the Bedford Book of Hours, c.1423 (left).

In Italy I was surrounded by Byzantine and mediaeval religious art, and in September the National Gallery had an exhibition of Italian Altarpieces, which came into my disseration.  I've written before about Ed Kluz's paper reliquaries:  I was inspired by the physicality of those mysterious and timeless structures.  The current Grayson Perry exhibition at the British Museum is a pick-and-mix of unconventional methods of representation.

Here are my sketches of St. James escaping from Prison (in Padua); Donatello's statue of John the Baptist (at the Frari church in Venice) and Carpaccio's painting of St. Peter the Martyr (at Museo Correr in Venice).

I'll do this in pictures:  the research drawings, alternative plans, layout, jigsaw work and construction. 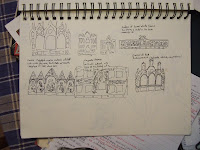 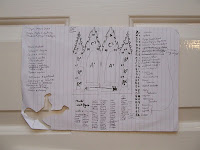 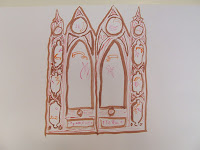 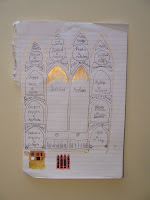 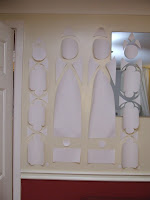 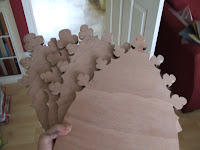 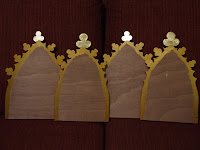 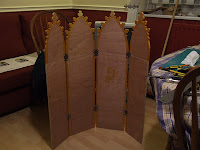 In a previous post I showed some of the early sketches, and I could have carried on with those thumbnails, but I want to print the main images (to make them easy to reproduce in different colours, and to keep the colours simple).  Here are:  an early test for Justinian; a page of experiments; and the acetates for the two main images:  Justinian and Appollonia. 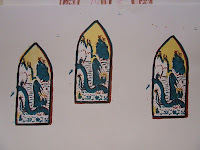 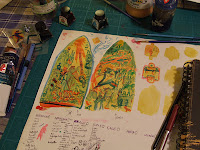 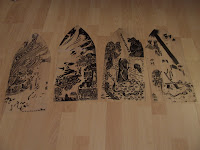 The course is to be exhibiting in the Bargate Monument Gallery in February!  My altarpiece will need improvements, but I'm looking forward to seeing it in there with everyone else's work.
Posted by Christopher Todd at 9:56 am No comments: