The last in this collection of outpourings of my distracted art.

I'm particularly proud of this, a decorative border for my father's sixtieth birthday card.

This interpretation of that... idiom... is based on some of the flora of Bangladesh: bananas, palms, mangos and papayas. 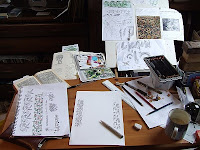 The process involved quite a bit of research and experimentation, making me wonder why I'm not submitting it for college. Here, too, is a view of my desk, at its most artistic and craftsmanlike.
Posted by Christopher Todd at 6:23 am No comments: 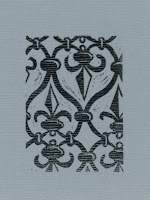 Next in the run-down of art projects "on the side", while hiding from course assignments.

The Red Hot Press in Southampton ran a short course on various methods of printmaking, on four Saturday mornings.

First was a linocut. It's a close-up of an iron gate. Again, it's A6 but it's nice lino, and so cut properly with a variety of blades.

Next is another typewriter picture. This was the best of my entry-level efforts with monoprinting - that is, the kind of monoprinting that involves painting on perspex with ink, making any type of mark and sending several layers through the press onto the same sheet to build an image up.

We did some gum transfer too but it's the book-binding that I'm looking forward to using - particularly once I've made some paper.

Posted by Christopher Todd at 10:29 am No comments:

"The West has a duty to depose Robert Mugabe"; "saving the planet is more important than evangelism". Agree? Disagree? Somewhere in the middle?

The Sheep Game: it's a gentle way of stimulating debate. It's used at a society that I go to at Southampton University, and which needed a stall at the jamboree for the recent visit of Archbishop Desmond Tutu.

Sometimes the leader of a session (well, occasionally) will designate each end of the room to be "agree" or "disagree"; make controversial, debatable or divisive statements and ask everyone to stand in that part of the room which corresponds with their position on the scale of opinion.

We thought thought this would engage people passing the stall and show how SCM works. Thus the president asked me to make three A2 boards with a fence down the middle, and with the top and bottom labelled "agree" and "disagree", so that people visiting the stand could stick a note on wherever they "stood" and make a comment.

I got a marker pen and had fun drawing country fields, trees, tumbledown stiles and different objects to bear the text. They're barren of animals because I can't draw them. To me the scenes recall the 1930s but I don't know why (it's something about clean, pastoral scenes with new methods coming in) and they call out to be populated with little people, including just one in a red-and-white-striped jumper.

We used those two questions and more and the boards ended up arustle with fluorescent post-its. We've kept them for future use.
Posted by Christopher Todd at 8:13 am No comments: 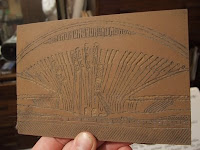 Second in the series of excursions in extra-curricular art.

A birthday card for Martyn, using one of my ongoing visual sources, the typewriter.

County Supplies' tough lino is barely worth hacking at with knives but I've a pile of A6 slabs, so I harnessed the awesome power of the electrical engraving tool. The Small Metals workshop at college have a high-powered, variable-speed system with finer heads than I've seen before. That's how I achieved the narrow lettering and lines.

The idea is that the letters of MARTYN are approaching the ribbon. This meant cutting them forwards (see above), so that they would be backwards in the print (see below).

The team in the printing workshop let me use one of their many presses - one with a big handle to pull horizontally - and the best print went to the card. Here's a less-impressive copy.
Posted by Christopher Todd at 8:53 am No comments:

A guide to what I've been doing in the past six weeks, while I should have been working on my assignments for college.

Let's start off with the flyer for Steps To Peace. The Roman Catholic chaplain at Southampton University approached me to produce publicity for this walk around the centre of town, visiting six different religious centres. The event is next Sunday, 8th March.

The "church", "mosque", "synagogue" and "gurdwara" shapes are cut out of black paper, with ragged edges as if they're "whooshing" so that I could fit all four on without shrinking them. Vedic temples and Quaker meeting houses are harder to depict and I had plenty of different guesses for the four that I included.

After a few edits on the computer I gave them shadow and a reversed / inverted version; made a map, found logos for the organisations involved and then wrestled with the various bits of text to fit on.

All of this was made in Word and there's a slightly different, single-sided poster too. The most pleasing part is that, whether by my skill or that of the printers, the black shapes on the white side fit almost exactly with the white "holes" on the black side.
Posted by Christopher Todd at 9:03 am No comments: