I'm a little busy at the moment. Here, to keep your interest, is my first project with bleach, for my friends' first (not fourth) anniversary. 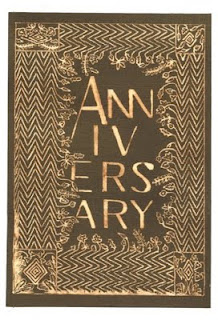 Posted by Christopher Todd at 7:33 pm No comments:

On Friday I followed a kind invitation to the opening of Katherine Anteney's "Think Happy Stuff" exhibition. Katherine is a printmaker working in Southampton and the exhibition includes linocuts, monoprints, gum transfer and work in other methods that I don't understand.

It's now on, for the rest of August, in a place called Nineveh, a "gallery / bookshop / coffee shop" in Havant. It's a little house in an old terrace; currently the venue for some events in the Havant Literary Festival (website; web log); and I suppose it's a little like the old incarnation of the Art House in Southampton.

There are books everywhere and the exhibition is in most of the building, although mostly in the room upstairs. At the bottom of the stairs I was struck by the "vulning" print, which you can see in the gallery on Katherine's website. The "vulning pelican" is a concept that I used in one of the Access Course projects last year.

The brief was to produce "recycled animals"; ie. 3D models, reasonably accurate in physical shape, made of scrap material. After some thought on heraldic themes I chose the "pelican in her piety", feeding her young by piercing her own breast.

As for the materials, I used a D-lock (the legs); various pieces of polystyrene packaging; a child's pink glove (the spurt of blood); the stuffing of a football; sheets of plastic wrapping and some strips of scrap metal (the edge of the nest). The feather coat and wings were made from the canvas and spokes of discarded umbrellas (a common sight in the streets at the end of Autumn) and were tied together with the bristles of a broom-head (again, found in the road). I gave up on making young birds to sit in the nest.

Of all the pieces in the group, mine was one of the most "recycled", even though it didn't look a lot like a pelican. One of the tutors felt that the umbrellas, as protection from the rain, mirrored the selfless protective gesture of the mother pelican. Who am I to object? She's sitting in a wardrobe now because I don't know what to do with her. Here is the construction process. 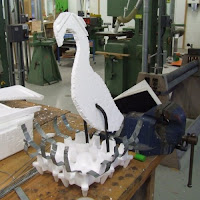 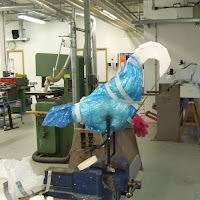 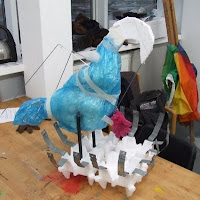 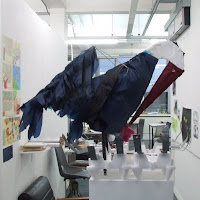 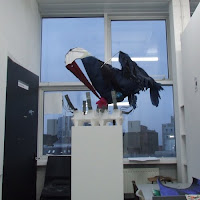 Posted by Christopher Todd at 10:37 pm No comments: 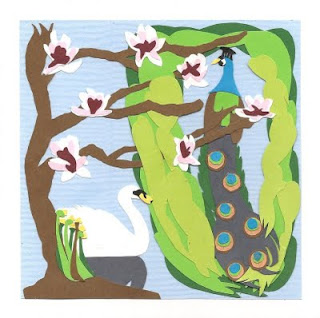 Here is a papercut for the engagement of Tom and Alex.
The green thing is a willow tree.
Posted by Christopher Todd at 9:18 am 2 comments:

My friend Al showed me his projects from college. I wasn't aware of the great joy that is to be had from drawing with bleach on a wash of ink. It looks like it's burning through, seared in the black. It's also just like inverted porcelain. This is a doodle from my preliminary experiments. In this case, the blue-on-white image is the one that is inverted. 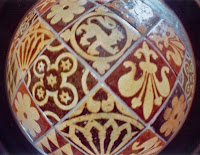 Today I had three films developed. Over all the pictures were pretty good. This is one of the most pleasing photos: a close-up of some of the re-glazed tiles at Winchester Cathedral.
Posted by Christopher Todd at 11:52 pm No comments: