Aspects Of The Civic Centre

In which I am commissioned to bring gaiety to Southampton Civic Centre.

My plans for the southern entrance (for the council chamber) have been approved!

The bunting that I posted about last week is to go around the double-stairway and balustrades.  I have much Photoshop work to do, and then happy hours of screenprinting.  Here is my rough sketch. 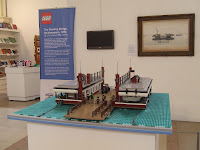 On the other side of the complex, Southampton City Art Gallery is currently on Hampshire's Lego Mania Trail.  From 28th March to 9th June, seven museums across the county have special Lego models.  Southampton has one of the "floating bridge" that ran across to Woolston until the Itchen Bridge opened in 1977.  It is built to the scale of Lego people, and is based on L. S. Lowry's painting, of 1956.

The other displays are pretty good at the moment.  The west circuit of rooms is really eye-popping.  I had never seen "Togetherness" by Lisa Milroy (whose "Melons" is one of my favourites in the gallery), a busy melee of geishas and mounties that justifies a trip on its own.

Sadly, the opening hours have been cut to 10-3 on weekdays and 10-5 on Saturdays.  At least the council now has a My Journey website to make the buses and cycle options clearer.


I'll leave you with a lot of text:  a description of the gallery collection in 1964, from "A Survey of Southampton and Its Region" (Edited by F. J. Monkhouse, Professor of Geography in the University of Southampton), a hefty book that I bought the other day.  It is very thorough and discusses the present state and future predictions for the port and most other aspects of the town (which became a city between the book's writing and publication).

The "Aspects Of The Civic Scene" section includes "Museums and Art Galleries" (by P. S. Peberdy and M. A. Palmer, Curators of the Southampton County Borough Museums and Art Gallery).  Here is the full text on the Art Gallery.  The first time I read through, I did it aloud, which got steadily more challenging.  The bold type is my own.  It really is an impressive collection and setup.  It's fascinating to see the new, post-war names coming in.  Most of the description is still true.

Southampton Art Gallery is now twenty-five years old; opened in 1939 as the final section of the Civic Centre buildings, but damaged during the War, full activity could not be renewed until 1946.  The eight rooms and large Main Hall have now been redecorated, equipped with up-to-date lighting, and are being provided with suitably designed modern furniture.  The gallery itself and most of the permanent collection largely owe their existence to the bequest of Robert Chipperfield of Southampton, who died in 1911, which provided a substantial part of the cost of building.  A income of some £4000 a year from this bequest has enabled a wide collection to be built up.  Some of the purchases made in the 1930's, before the gallery was opened, would not be possible now with the spectacular rise in prices, particularly in the field of French Impressionist painting.

For a short period before the War of 1939-45, Southampton possessed one of the wealthiest galleries in the country, for in 1932 a further bequest from another leading figure in Southampton - Frederick William Smith - augmented its income, and serious buying from both bequests began about this time, in anticipation of the building of the gallery.  In making purchases Southampton has been fortunate in having, by the terms of the two bequests, the advice of the Directors of both the National Gallery and the Tate Gallery.  Purchasing policy has not been rigid, but has been governed to a considerable extent by the state of the art market.  Just after the War it was possible to concentrate on British painting of the eighteenth and early nineteenth centuries, while at the same time buying fairly extensively recent and contemporary British painting.  This still continues although an attempt is now being made to secure a small number of Continental Old Masters to form the nucleus of a collection before it is too late.  This is particularly important, since the removal of two extensive long-term loan collections has left the gallery very weak in this field.

Sculpture is also within the gallery's purchasing policy, and a start has been made here, not only with small bronzes in the gallery but with a Rodin figure on the Art Gallery forecourt.  It is hoped to add further sculpture outside as opportunity arises.  Finally, a sum has been allocated from the rates to purchase a small and highly selective collection of pottery to include pieces typical of their period and style from some of the major ceramic epochs.

The strongest section of the collection at present is British painting from about 1700, with an emphasis on the eighteenth and twentieth centuries.  The most outstanding painting here is Gainsborough's full-length portrait of Lord Vernon, first exhibited in London in 1767.  Slightly earlier is the Reynolds of Cornet Nehemiah Winter, painted in 1759.  There are two portraits by Romney and a Lawrence of Archbishop Moore of Canterbury.  Landscapes include Richard Wilson, sea-pieces by Turner, Morland and de Loutherbourg, a large J. C. Ibbetson of North Wales and an interesting late landscape by Wright of Derby.  In the nineteenth-century rooms are one or two pre-Raphaelites - Holman Hunt, Burne-Jones and Ford Madox Brown; amongst the earlier pictures here are a John Martin of 1812 and a large Etty.  One of the two Tissots is certainly the finest painting in this room, which also contains a portrait by Sargent.  British painters of this century include a strong representation of the Camden Town Group, centred on Sickert (one of whose rare self-portraits the gallery possesses); Gilman, Gore, Bevan and Ginner are all represented, in some cases by two or three examples, as well as more obscure painters like Malcolm Drummond, and associated artists such as Wyndham Lewis and Augustus John.

There are several paintings by Wilson Steer, and the next generation of painters forms another strong section of the collection, with works by Paul Nash, Matthew Smith, Stanley Spencer and Gwen John.  More recent painters include Graham Sutherland, John Piper, Victor Pasmore, Ivon Hitchens, John Bratby and Roger Hilton.  This section has recently been augmented by the splendid bequest of Mr. Arthur Jeffress, which includes ten Sutherlands and five Pipers.  This bequest also greatly enriched the small collection of French nineteenth- and early twentieth-century paintings, of which three most important are a large early Courbet-like Sisley of 1867, a Camille Pissaro of Louveciennes dated 1870, and a 'white period' Utrillo.  Paintings by Delacroix, Corot, Tissot, Boudin, Forain, Harpignies, Bonnard, Vuillard and the Douanier Rousseau are included, as well as several by the Belgian surrealist, Delveaux.

Amongst the Flemish painters are a pair of early portraits by Van Dyck and works by Goossen van der Weyden, Jordaens and Joos de Momper, while the Dutch School includes landscapes by Philips Koninck and Isaac van Ostade, a J. D. de Heem still-life and a portrait by Nicholas Maes, as well as an interesting Cesar van Everdingen.  The earliest picture in the gallery is a triptych by the fourteenth-century Florentine painter, Allegretto Nuzi, and the Italian section also has good examples of Sophonisba Anguisciola and Desiderio, and a characteristic Salvator Rosa landscape which it is interesting to compare with those by Francisque Millet and Gaspard Poussin amongst the French School. Bronzes by Maillol, Rodin, Degas and Epstein, and a few British water-colours and drawings, complete the collection as it is at present.

Posted by Christopher Todd at 3:31 pm