I'm good at making a big plan for a project... and then failing to stick to it.  After a couple of weeks of slow progress, I was at least relieved to find that no-one in the year-group has got far off the ground.

College has been a good place.  We've had talks from the tutors about their work; I've made Christmas cards; people are using the new studios more (and someone knew of a piano in need of a home, so now that's in there, I like to imagine a tutor playing increasingly fast honky-tonk music to make everyone draw faster); the Solent Showcase gallery opened; and next week our honorary professor, John Norris Wood is giving his annual lecture and leading a one-day project, for which I need "a curious object".

As for the project, I'm still stuck on the its scale.  I could make a whole lot of martyrs, quite simply, or a few detailed ones.  I'm frustrated to be so undecided and to still be making lists of visual tricks to try.

A tutor pointed me to a few artists who make scenes of many extraordinary figures, darkness, narrative and drama: 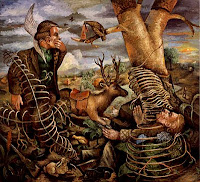 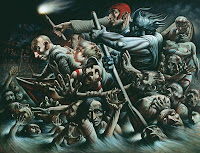 This is all much more extreme than my vision, which is a closer to this, Alice and Martin Provensen's "The First Noel". 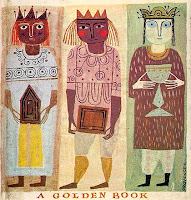 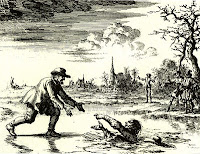 The list of possible figures to depict is still long and could include a few more serious modern "saints", such as Dietrich Bonhoeffer and Martin Luther King.  I feel like I could spend years on this theme, especially when another tutor said that my research could form a part of the project.  I could spend even more hours combing through old books - John Foxe's "Acts and Monuments" and Thieleman J. van Braght's "Martyrs Mirror", whose stories of the faithful defined the identities of religious groups and of nations.  (See engraving).

The schedule that I made for this project says that I should be exploring text styles; body positions and facial features; symbols and backgrounds; light and dark.  It all sounds exciting but it's easier to just make more gingerbread men.

Here are:
a) Sketches from the British Museum, of Greeks fighting centaurs (I just drew the human figures).
b) Simple attempts at the first few of my selections from the Oxford Dictionary of Saints. 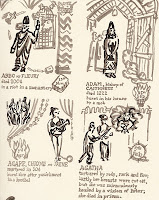 Posted by Christopher Todd at 9:24 am