Here's a poster for the film club at the college a couple of weeks ago.  It was a short project, so here's an analysis of how it came together.

The tutor's brief, which I received on a Thursday morning by e-mail, read

I knew already that it was to be Jour de fête and had watched a trailer (the bande annonce, on The Youtube), so I started drawing with a few ideas about rustic or small-town France in the late '40s; busy bicycles, postmen; disordered farm animals; clocks; French flags and the people scenery of a town.

The brief meant that I couldn't use colours, so no subtle coloured backgrounds; and the poster needed to be fairly simple.  My work usually comes out better when I've done something simpler than I'm comfortable with; and printing and rubber stamps always force simplicity, so I experimented with an old rubber cut into block shapes of a man's limbs and hat; making them into people or patterns.  That only came into the figure of the postman, Jacques Tati; the rest was in brush pen, keeping it good and rough at times.

The second difficulty was the dimension, which I assumed was to be slotted into a larger frame.  With a tall format it's easy to end up with empty space and I'm not sure even now that I used it best.  Eventually I sent the flow of the design outside the frame. 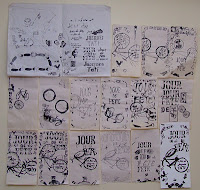 I was quick to settle on the bicycle as the central motif, perhaps with text inside it.  I ride a bicycle all the time but still had to look at pictures to get it right and make it more dynamic.

Still, I wanted more imagery to express the setting and feel of the film.  This lead to all sorts of French items up to and including the Flight Of The Conchords' shopping list from "Foux du Fafa":

The boeuf and baguette made it into the border, mingled with the farm animals and postal items - the postal system seemed a good motif (stamps, packages, bugles, etc), especially as it lends itself to an air of busyness.  I had a stab at a border of French faces but it's not my skill.

For the text I took inspiration from one of my favourite books of type, "Lettering of To-Day" (1937, edited by C. G. Holme) - so many lovely old styles, but I wanted to avoid the ones that looked too English.

Above are all my drafts in sequence, up to the final piece.  I relied on being able to move a couple of things once it was scanned in.  I e-mailed it off on the Saturday morning because I was going away for a couple of nights and was very relieved to get a text saying that it fitted the bill.

When I saw it on the wall (see below) a few days later, in its border, I wasn't surprised that Jonny had inverted it.  It stands out a bit more in his design, so I don't mind.  Later I had a brief play with colour (see the "brown paper" effect), but I'm happy with the design, for a project that really only took one night of work, with time beforehand to think it over. 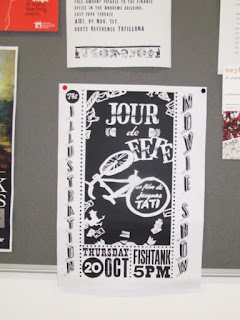 At five o'clock today the Illustration Film Club is showing "Submarine" by Richard Ayoade.  Fine Art are going head-to-head with us, showing "Blow-Up" in a nearby room at the same time.  It's a tough one, but I have gingerbread men and I'll make ours the better of the two.
Posted by Christopher Todd at 8:25 am