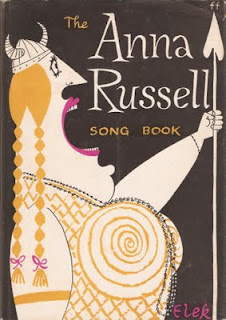 Anna Russell was an opera singer who turned to comedy. She gained a following for her satire of the classical stage. Clearly, she knew everything about singing and the repertoire, and her routines had just the right level of irreverence for her audience.

When she died, in 2006, I was called on to help my mother to find videos on youtube, including one of her big hits, a synopsis of The Ring Of The Nibelungen. This was filmed in later years and she cut a tremendous figure on stage in a huge floaty pink dress, speaking from the piano. There are lots of laughs as she highlights every ridiculous aspect of Wagner's plot. Clearly, she knew everything about singing and the repertoire.

Today I've found The Anna Russell Song Book, from an earlier period. It's an edition from 1960 and in beautiful condition, including the dust-jacket.

It includes another of her best-known routines, How To Write Your Own Gilbert And Sullivan Opera, sends up the typical roles and the pitfalls of performing operetta. 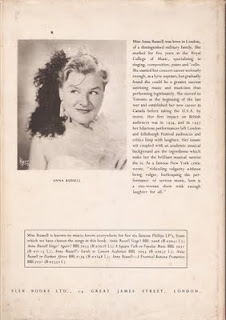 The introduction: "This short course is included for the benefit of all harassed producers who are wondering whether their audience will stand for 'The Gondoliers' again this year. Just follow these broad outlines and you'll find there's nothing to stop you putting on a completely new Gilbert and Sullivan opera every year, all practically indistinguishable from the original ones - which are practically indistinguishable from each other anyway. This particular example is set in present-day New York, so there isn't even any need to hire the costumes."

Russell goes on to introduce the soprano character Pneumonia; her rich father Parnassus Q. Vanderfeller; her simple and poor true love John Smith (tenor, "pretending to accompany himself on some stringed instrument"); the comic character Clodbelly Bunion for the patter song; and the matronly contralto Dandelion for a surprising revelation. These are all backed up by a chorus of New Yorkers.

In the end, "Nobody will be surprised to hear that John Smith turns out to have the onion mark behind his ear, so that he and Clodbelly Bunion are really each other. So the marriage goes on after all and everybody is happy - except for the funny little man, who always gets paired off with the large contralto. Then they all sing at once and finish up with a terribly traditional dance." 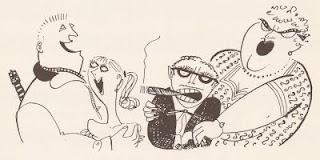 This section of the book comes after some stand-alone songs, including the French parody "Je N'ai Pas La Plume De Ma Tante" with a typically witty introduction:

"The singer with no voice whatever is well catered for these days. The French art song is a particularly fertile source of supply. These generally have utterly beautiful words, set to rather intermittent music, and all the singer is really called upon to contribute is soul. By the way, it is helpful if people can catch a word here and there that they have heard before - like amour or something - because then they'll all feeel one up on everybody else and applaud like mad at the end. This song has been specially arranged with this point in mind."

The illustrations inhabit a mid-point between Gerard Hoffnung and Ronald Searle, in both style and subject. Michael Ffolkes was a cartoonist of some note in Punch and other London publications.

My mother will love it.

Posted by Christopher Todd at 4:17 pm