Blatant patriotism doesn't flow easily for the modern Englishman. The 23rd of April was Saint George's Day and I did my best to stoke the festival feeling.

Early on I got red enamel and white spirit all over my hands and the kitchen sink - an accidental act of symbolism, perhaps. After an afternoon sitting in the sun with Hampshire wine, Suffolk cider, cream teas and jelly and ice-cream, I was as pink as an old empire map.

Late in the day I asked Fred, Tom and Marianne for a few reasons to be proud of England:

Tom:
We once ruled the world.
Our contribution to humanity (and science, art and music) vastly outweighs our size.
We led the fight against slavery.
Magna Carter, "the original Bill Of Rights".
Opportunity for young people in politics.

Marianne:
We have no dangerous animals, weather or seismic activity.
The countryside and coastline - the latter never being more than seventy-two miles away.
Small enough to travel around.
Cimate.
The multi-party system.

My list (including many attributes that I want to live up to):
I am English and so is nearly everyone that I love.
An exciting lead-up to the election.
A history of excellence in science, invention, art and literature.
A genuine and active concern for the people all over the world.
Beautiful land.
A broad and impressive language.
London.
The NHS.
Radio 4.
High aims: democracy, fairness, freedom, respect and constant self-scrutiny. 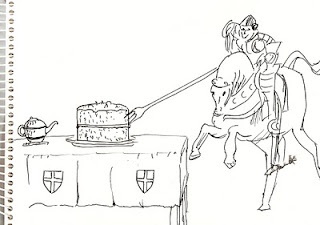 Posted by Christopher Todd at 3:16 pm