My degree course finished in June 2012, so this one is a little late.

My degree exhibition:
SOUTHAMPTON.  All of it.  Well, as much as I could fit onto three metre-wide discs of paper.
I wanted to talk about the city's architecture, development and mythology.  From the idea of a map, the project became three separate pieces:  Places, People and History. 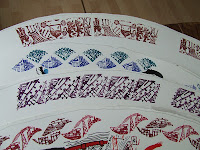 The process involved a lot of drawing, research and photography around town, mixing standard tourist facts with little details that I remember hearing about Southampton over thirty years here.

The borders are lino-printed by hand and the rest is a jumble of ink drawings and text.  I wanted to keep it light and immediate - which is tricky when every mark is final.

To round off the display, I etched two sheets of brass with similar images, for brass-rubbing.

The show was held at Solent's new studios, which were then opened officially by Sir Peter Blake.  I met him, but had no idea what to say.  I won a prize for drawing, selected by Paul Osborne, our life drawing tutor - an astounding honour for me. 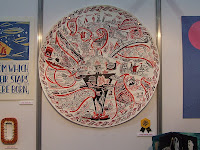 Solent Illustration had a stall at D&AD's New Blood fair at Spitalfields Market.  For me, it made up in part for our London exhibition falling through.  I was awarded one of the thirty "Best New Blood" rosettes.

Since then, my three pieces were framed; put on show in the Solent Showcase over the Summer; then bought by the university; and now are at Quay Arts, Newport, Isle Of Wight.

Meanwhile, a similar piece -  a plate design for the university - is on display at the Wightlink terminal in Yarmouth, Isle Of Wight, along with other work by graduates from Solent's creative courses.


Here are some close-ups:

Posted by Christopher Todd at 7:50 pm