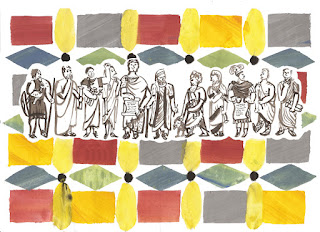 Roman historians!  This is a project that has been on my list since I started it a few months ago, meaning to experiment with stencils for roughly-brushed shapes without the fragility of collage.  I married it to the theme of classical writers and set about creating lively characters for a chronological series of figures.

I made sketches last year but picked them up at the weekend.  I think the primary difference is that I now do arms in a different way.  If they look beefy it's because my inexactness tends to lead to limp and skinny arms, and I decided that, if I'm going to get it wrong, an excessively big arm is more interesting than an excessively wimpy one.

So here is a background that I hope looks like inlaid marble, with a lineup of the following figures:
These drawings came after pages of sketching.  The pen-drawing style is hasty, so I am always unsatisfied with the final images.  As a result, I would like to do them all again, slightly bigger, and with space for the later figures, Eusebius of Caesarea, Olympiodorus and Priscus; and to fit in Paterculus' little Trojan horse that I came up with.

I spent some time looking at Roman costume and the make-up of the toga - the umbo and sinus (excellent names for a classicist's two dogs).  HERE and HERE are my two main sources.  Other historians that I came across but left out were Julius Caesar, Diodorus Siculus, Dionysius of Halicarnassus, Pliny the Younger, Ammianus Marcellinus and Zosimus.  Other writers and poets include Seneca, Horace, Virgil, Ovid, Catullus, Propertius and Pausanias.  They're such fun to conjure with.
Posted by Christopher Todd at 4:52 pm