A week of extreme busyness.

Today was my final day at Solent before going to study on the continent... and what a day!

I cleared the printroom of all my bits and pieces (the Pile Of Todd), because when I come back the department will have moved to another building. Before that I rushed to print a set of lino-cuts of ironwork patterns. I finished them last night at my parents' house, keeping the lino warm with their electrical-dining-room-hot-plate thing. 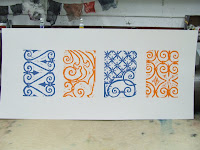 Other parts of the day: photography; photoshop; administration; Salvatore Rubbino's entertaining lecture; cycling back and forth; buying a large box...

but the best part was John Norris Wood's drawing session. He is our newly-appointed honorary professor of illustration. Yesterday he gave his inaugural lecture (highly comical for a number of reasons) on 20th Century British illustrators, starting from Edward Bawden. 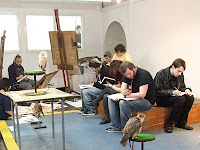 Today he had arranged for a number of birds of prey to be brought to the drawing studio: a kestrel, a harris hawk, a Bengal eagle owl, a barn owl, two gyrfalcons and a great horned owl. We haven't had nature-drawing of this kind before and the atmosphere was magical. As Josef said, it really felt like being at art school.

We ended up going for sushi before I collapsed at home and failed to start packing for my trip.
Posted by Christopher Todd at 1:26 am