The Cult Of Less

Here is some work from a one-day project on my Illustration degree course. To produce an image in a few hours is a daunting thing, but realistic and highly improving.

The tutors gave us all a choice of three editions of a weekly column in the Guardian Weekend magazine, requiring an illustration of 105 x 105 mm. The Guardian has played a large part in this module on editorial illustration.

I chose "Is the 'cult of less' simply an exercise in obsession" - and we did not see image that accompanied the article in print.

After the 10am meeting we were sent away to work on ideas and present a rough image to the whole group at 12 noon.

Here are three of my sketches: 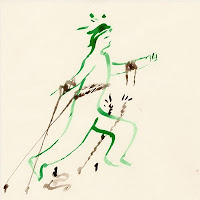 I tried to push myself beyond the immediate associations, and this was the most popular with the tutors: 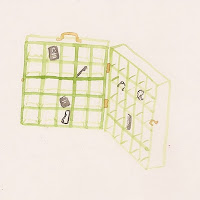 This is the stage, in a professional job, when the client can change their mind about the specifics of the brief (and could still elect against the final image when they receive it). My tutors made suggestions for every student - in my case, the wonderful idea of shaping the showcase as a head. Now we had two hours to produce a final image. These are just two of the many rough variations that came out of this stage: 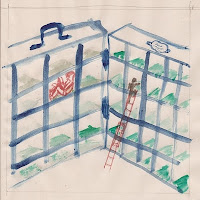 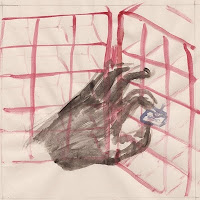 To send the image to the client it would need to be scanned in and edited, but I stayed with physical work, scaled up from the original dimensions. It was a real rush and I'd like to do more to my piece, but the exercise is about what one can do in the time. The final frustration was the smudge of blue in one corner from hasty work with the guillotine. 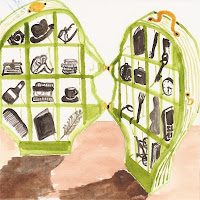 At the group meetings it was interesting to see how many of those working on the same article had come up with similar concepts, although they were executed in different media. Geoff Grandfield's published image shares elements with my and others' pieces.

These projects are excellent for spurring me to work and process concepts faster. We'll have another in a couple of weeks, meanwhile we have similar briefs on a one-week timescale.
Posted by Christopher Todd at 5:21 pm